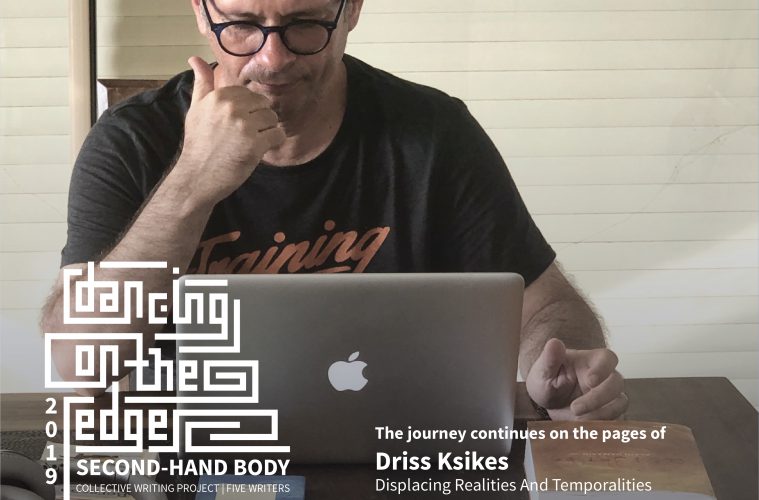 For the description of the collective writing project, click here.
To read the first story from Second-Hand Body, click here.

A play by Driss Ksikes

An empty stage. On a squared screen, as in a monitoring booth, several videos appear in an array, showing: seagulls whirling above an agitated ocean around a desert island; a scale model of the Babel Tower that has been virtually reconstituted; five men in conclave around a large table, and a lightly dressed woman standing in front of the open emptiness. From the conclave, a voice speaks in front of the screen, and soon after the woman turns around…

Come back, Abla …
There is no more war
Hope is reborn
We need your voice …

(The screens go blank. Abla appears on stage, alone, standing before emptiness, with a straw hat on the head, a sling bag on the shoulder. Each time, she takes a sheet of paper and transforms it into a bird. The sound of the waves and the seagulls is now heard in the background.)

Abla: I could hardly wait until a free way opened up, until the platform stopped suffocating me, and until its dwellers, who keep proliferating day after day, stopped watching me. When I realized that I could be alone with the birds of Atlantis, I gave up everything, my titles above all, and have come here to listen to their symphony.

(On the other side of the stage, there appears Sam, wearing the apparel or a
noble man from the Orient. He is followed by a secretary who takes note of all that he says on a tablet)

Sam: To all the visitors or the platform we make this urgent call: let us stop watching souls half in peace, wandering behind walls standing in half only . Let us rebuild Babel together. Let us recover this human desire to touch the sky while we are still alive. ( Exits )

(Every time, Abla takes out a paper bird from her bag and sends it towards the sky.
The sound of the waves and of the seagulls can be heard in the background.
Sam joins her without taking notice of his presence)

Sam: Sad is the sound of the seagulls.

Abla: No, it’s clamor of their pleasure. It fills the air.

Sam: What are you doing?

Abla: I am jotting down desires on paper.

Sam: And what’s written on them?

Abla: May the people I love never land in a graveyard.

Sam: But everyone is bound to land in a graveyard someday.

Abla: Not the people with heads full of dreams

Abla: Their dreams allow them to take flight.

Sam: And what makes you think so?

Abla: The birds, when they flap their wings.

(Sam draws closer to her.
Abla glances at him from the corners of her eyes)

Sam: I am aware that you know how to decipher the language of birds.

Abla: How do you know?

Sam: I have read something along these lines on your profile.

Sam: On the platform

Abla: I have erased everything.

Sam: You can’t erase everything

Abla: I don’t intend to go back.

Sam: You will never be able to leave. The platform is like an octopus. As soon as it has been detected an inkling of life, it promptly decodes its longing.

Abla: I have cut the wires.

Sam: But you have left your prints.

Sam: Your pseudonym has not disappeared. You are still registered as “the Lioness of Atlantis ” And your last message has been registered on the cloud: “I am going to rejuvenate myself at some spot on the sea-front, on my dream island.”

Abla: I have been fled from the platform because I was being stalked solely for my body.

Sam: The platform is a very large mansion with a thousand windows.

Abla: A virtual whorehouse, without exit.

Sam: With countless screens to escape from.

Abla: The screen clung to me. I could no longer find a blind spot where to retreat.

Abla: A white man, from the West?

Sam: No, a white knight, a benevolent pirate.

Abla: And what is your pseudonym?

Abla: The Saint of Baghdad?

Sam: In the flesh. But a white knight , as a calling.

Abla: And to what do I owe the honor of your visit?

Sam: We need you.

Abla: Babel is no longer in existence.

Sam: We are bringing it back to life.

Sam: We, the five developers of the Babel Tour .

Abla: Why you, in particular?

Sam: We are the only ones to hold the titles of saints

Abla: These are just sacred pseudonyms that give you the illusion of power.

Sam: They take us a step ahead, above all…

Sam: Everything is a question of names. And these pseudonyms give us the exclusive and inalienable right to this ancient heritage. It is the law in our place.

Abla: But why revive Babel today?

Sam: There is no war anymore. We now have a better possibility of selling the past.

Abla: And what do you intend to sell exactly?

Sam: An ascent towards the seven heavens by way of a spiral staircase

Sam: This should be of interest to you – if you spend your time speaking casually to these souls who fly in the air.

Abla: Forget about my birds. They have nothing to do with this.

Sam: In Babel, people would be able to discover each stage in a language and to get the feeling of touching the heavens when they come to the summit.

Abla: And will you really rebuild the tower?

Sam: No, we propose a remote access to a tour.

Abla: And why not a tower with hard materials?

Sam: We are afraid of the tower, if erected entirely, would be invisible summits and that each people, spoke the languages ​​of others only half-heartedly, would be fancy themselves as the lords of the heavens and resort to killing one another.

Abla: And what would this remote tour be like — ascension?

Abla: And why would the visitors or the platform buy this tour, and not another?

Sam: The heaven is only accessible in the Orient.

Abla: And so what?

Sam: Offering them the chance to come close to heaven during their lifetime without shedding a drop of blood is priceless.

Abla: But they don’t need such a merry-go-round to access the heaven …

Sam: However, for the merry-go-round to work, we need you.

Abla: And what will I be doing in there?

Sam: You are one of the seven chosen ones. And you can speak all the languages.

Abla: No more. I do not speak any other language than the language of birds.

Sam: This is exactly why we have chosen you. The language of birds may give them the illusion of accessing the seventh heaven.

Abla: Even if most people believe they must speak their sacred language to access the seventh heaven?

Sam: You want to know how to sing like a bird. Chant is the best language people listen to get about themselves.

Abla: But there may not be any more birds in the skies of the Orient, after all these wars.

Sam: It is not reality that matters, but what we make of it. All it takes for Babel to be reborn is to re-invent the birds by means of your voice.

Abla: More than humans, birds are quick to realize when they are being manipulated.

(Silence. She looks up to the sky and reads to him the messages on her mobile
phone)

Sam: And where does your passion for birds come from?

Abla: From a tale

Abla: Of the Simorgh.

Sam: And what does it say?

Abla: A tale is long, you know

Sam: You have a beautiful voice.

Abla: You are no longer in a hurry?

Sam: Eager to hear you. Go ahead and tell me …

Abla: (looking up to the sky afresh)

The Simorgh was a rainbow-like bird, with wings stretching to reach out to both the bottom of the sea and the seventh heaven. They came close to the sun without ever being burned. The bright colors of the world radiated onto it. But no bird that we know or has ever succeeded in becoming like a simorgh. The guided all of them towards light, in the quest after truth. And when they arrived, they asked themselves to see in the reflections which appeared before them. Truth was within them but they have disdained it…

Sam: Are you in search of your truth?

Abla: I am looking for this weird bird which would help me find it.

Sam: Or a saint to help you come close to it…

Abla: A saint would only put me into a cage.

Sam: Or help you ascend to the seventh heaven

Abla: This is but an image. I am not a tourist whom you might sell your mirages to.

Sam: What if you could be the hostess in seventh heaven and behold the Simorgh, too.

Abla: Never. As soon as I have seen him, I would no longer be able to dream about him.

Sam: But, after all, we have the same celestial dream.

Abla: Not really. You are looking to set up a market and I am looking to build a refuge.

Sam: I suggest you simply bring a bit of your Oceanic breeze to our Oriental desert.

Abla: I am not the seller of the Oriental charms that you fancy.

Sam: That’s what you think. Even with your birds’ tale, all you do is rent the wisdom of the Orient.

Abla: I do it in pursuit of truth.

Abla: It does. In the small voice which whispers the meaning of life to me.

(She moves further away and starts attempting to sing without lyrics)

Sam: (applauds) Beautiful. This would be enough for people to flock to the Babel tour.

Abla: I am not doing it for them.

Sam: The white knights … the saints of Babel.

Abla: Not even for you.

Sam: Who would you do it for, then?

Abla: For the dreamers who soar in the sky expecting nothing.

Sam: The Simorgh is only a tale.

Abla: And Babel, a mere chimera.

Sam: You are depressed.

Abla: I am taking heed.

Sam: Everyone is expecting Babel to be born within the platform.

Abla: I expect nothing from a platform that deprives people or their conscience.

Sam: You are rambling.

Abla: I am no more the Lioness of Atlantis, which my profile describes.

Sam: Our identities pile up but don’t cancel out another. We are all doomed to become what we have never been.

Abla: Whoever has called the shots?

Abla: I am not at their mercy.

Sam: All of us are actually.

Sam: The screen is a second skin to you, as you say? Make of it your shedding.

I am already elsewhere, I am telling you.

(She runs in an attempt to get out but an external force brings her to a halt.  She tries again taking different directions. Each time she is halted in her momentum.
She loses her mind, screams, freaks out, and looks out for an exit, in vain. Meanwhile, Sam reads the messages on his portable phone).

Sam: As many as 201,380 people have already endorsed the call. The Babel will be launched. We will be waiting for you to help us bring back life to it.

(Abla sings tunes without lyrics, emits the sounds of birds.
Seemingly perceiving a gap, she attempts to work out the way by jumping,  but stands still, much like a spider caught up in its web).