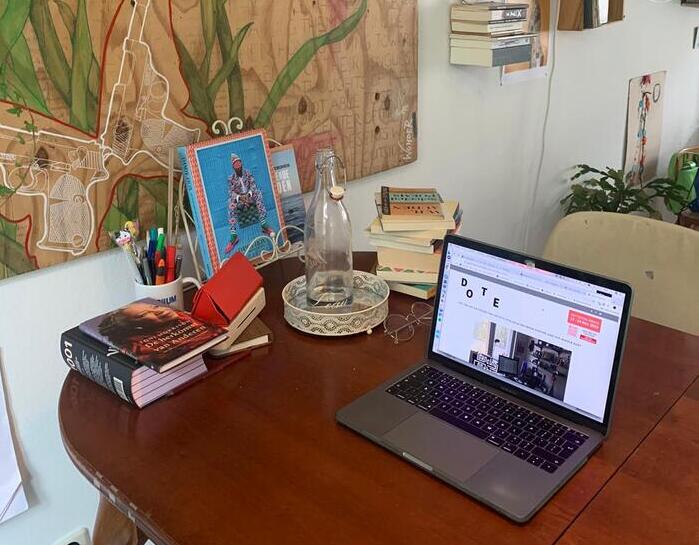 Second-Hand Body is a writing project in which DOTE commissions five writers from the MENA region and The Netherlands to write a text collectively. An invitation and a journey traversing different bodies, temporalities, locations and references of the writers and the worlds they inhabit and imagine. The proposal is based on the concept of second-hand, the re-using of what has already been used and has a history.

We were all into bell-bottoms.
And platforms, even though
we were still too young to wear them.
Oh, and hot pants!
We didn’t really like the clothes mom made us,
but we wore them anyway.
We had no choice.

If you were modern, you had Chinese on Sundays.
And if you had bad luck, you had macrobiotic,
like we had most days.
We were dragged along to
marches and demonstrations.
Malieveld, The Hague.
Against the war,
against nuclear weapons,
against domestic violence,
against apartheid
against Shell.
With our home made protest signs,
mom made us spend our precious Friday’s
after school on sheets, cardboard and paint.

It was the time of the Dolle Mina’s.
Angry feminist on barricades,
waving bras like flags.
With a wish to change the world,
have men do and appreciate women’s work,
women do men things,
make the world a better place for women,
mama explained.

And we at home wondered
if mama was a feminist
even if she did the dishes, the laundry,
actually the whole house keeping.
Because if father did, she’d complain,
she would have to do all over again.

Mom was an excellent seamstress.
She had this habit of eating apples
when she was behind her sewing machine.
So much that we began to associate sewing with apples
and apples with sewing.
She taught some of the neighbor girls
how to sew on Tuesday nights.
Not us, because she had no patience with us.
And we were afraid
of having to wear the clothes
we would learn to make.
Sometimes, when she was about to finish a dress,
ironing out the last hems,
her eyes would become glassy.
We knew a story would follow.
The story would always start with a question.

You know how we danced in those days?
She would put down the iron and get up.
She would step from left to right.
One two, and then you shake your hips like this.
She would giggle while we would sit quietly,
watching her move all over the room.
We danced in a group, she’d wave her arms around her.
It was called the electric slide.
She’d step and throw one leg in the air.
Luther Vandross, Frankie Beverly, The Gap Band.
She’d start to sing softly.

Mom, we interrupt, when was this?

In those days we wore bright colors.
Roses in our hair.
I had this big red one,
big hoop earrings,
red lipstick
and tight tight shiny tights.
Heads turned when I walked in.
Eyes lit up,
smiles
winks.
Man, did I turn heads…

Did you meet father there, mama?
Was it love at first sight?

The weekends were wild, she would continue.
From Fridays till Sundays,
sometimes we even started on a Thursday.

But she wouldn’t answer our questions.
She would smoothen the hem
and ask one of us to pick up the iron
and straighten out the creases.

Our walls were full of pictures,
some in frames,
some just ripped out of magazines.
Angela Davis hung over the couch.
Look, mom would say when we complained
about our afros.
Look at her, how beautiful!
We liked hers but not ours.
Ours were not as symmetrical,
not as round as hers.
Because mama would never
let us go to the hairdressers.
No, not t if I could do it myself, she would say,
then cut us asymmetrical afros.
If you would wriggle while she was working on your head,
you could end up with some tufts of hair missing.
It doesn’t matter, she would say,
with this kind of hair,
no one can tell.

Next to Angela Davis a poster read:
Stop the war in Vietnam
and under there a drawing of Che Guevarra.
Father had a beret just like the one in the drawing,
a black one that fluffed on top.
Father said that one day we would all go to Cuba.
He listened to tapes off Fidel Castro on his tape player
which we weren’t allowed to touch.
But the record player he’d let us use sometimes.

Father never talked to us for long,
except when he started to talk about the army.
And the United States.
Our limbs would get stiff,
our faces restless
and questions would burn on our tongues.
Did he go to war? Which war?
And would he take us to the place he was born?

But he wouldn’t answer our questions.
When he’d finally finish his story,
he’d get up and put on one of his records
and sing along.
Father, he could sing.
He sung Marvin, he sung Otis, he sung Curtis.
When he was home. When he was home.
Because sometimes he was gone for a long long time.

They threw the words at you
like knifes in a circus show.
And you had to run and cover your ears
as quick as you could.
But they would be louder.
Your father is not your father!
Your mother is a bad woman!
Your parents owe money!
I saw your aunt with another man!
Your uncle is a drunk!
And we would yell in return
Not true!
Not true!
It’s a lie, lie lie!
It’s a made up lie!
And we would chase each other,
to beat the liars.
To beat the lies.

We would never bring the words
back into the house.
We would hide them in the front yard,
spit them out on the sidewalk.
But they would sometimes pop up
under our blankets,
in the deep of the night.
And they made us study our father
who was maybe not everyone’s father.
Could that be true?
We compared the shape of his nose with ours,
the length of his legs compared to his upper body,
with ours.
And sometimes we could recognize some of ourselves and
we’d cry a little out of relief
because we knew the importance of blood.
Blood runs thicker than water.
And when we couldn’t find some of ourselves,
we felt lost.
And maybe all of us felt lost
but we could not share the pain of not knowing.
We read it in each other’s eyes,
our bodies held the same questions
but we could not share this grief.
And as it happens when you live in a house
with rooms full of doubt,
stacked with questions,
uncertainties,
it becomes haunted.

We desperately wanted to know
every space in our house,
every nook, every cranny,
every centimeter of the attic
of the cellar.
We feared the shadows,
the hidden spaces
full of snippets of pasts unknown,
storages with rooms for ghosts.

Half a story is not a story.
Did one of us feel more like a stranger, an outsider?
Did we hide secrets among each other?

These thoughts scared us, sometimes tore at us.
We longed so much for plotlines,
to complete the narratives
of our lives,
through their lives.

On days when the mood felt just right
and we would feel bold
we would ask mom about him.
We would ask father about her.

What was she like when you met her?
Was her hair long and shiny,
was she wearing the big red rose?
Why did you fall in love with her?
Tell us. Tell us.

What was he like when you met him?
Did he drive a motorcycle?
What did you like about him?
Tell us. Please, tell us.

We craved answers like warmth
in a cold winter,
thinking they could love us more
with the words
they withheld from us.

Sometimes we would clear off the table from apples, clothes
and the sewing machine.
We would empty boxes full of letters, pictures
and trinkets from a past that we’d find in the attic.
We’d pull out an uncle we’ve never met from the pile
and put him on top.
Tell us about him, we would demand.
But she would shrug her shoulders.
We’d pull out a grandfather
who died before we were born.
Place him in the middle of the table.
What is his story? We’d almost beg.
I don’t remember, father would say.
We didn’t give up.
We’d bring up Christmas two years ago
when there was no heating for two days, remember?
We’d open photo albums, point out pictures of holidays
we don’t recall because we were too young.
Where was this? Who is that?
We’d bring up a dog that barks in our memory.
Mom would say it was a cat.
Father would say it was a bulldog
and that he had to go because
he was aggressive towards kids.
Mom says his name was Alfons.